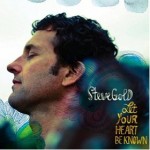 Wonderful read! Thanks for sharing ~