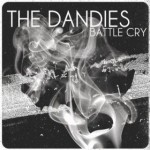 There’s a rally going on. People are starting to see that it’s time to stand up against the grain. Especially the grain of corporations that are screwing our economy and food supply up. This morning I heard about a lawsuit filed against Monsanto. That’s right Willie Nelson and a slew of farmers have banded together to sue one of, if not the, largest destructive forces of our food supply. Same goes for the maligned Occupy stuff against the crooks who have looted our economy. For both of those fronts and more, it’s a dandy new battle cry.

Which essentially brings me to today’s song. It’s called Battle Cry by a group called The Dandies. Fooled you into thinking it would be a Willie tune right? However, he’s well known. The Dandies? Not so much.

The video kicks right off with a images and track that harks back a few years to bouncy underground rock. Good thing the main images appear to be underground. Almost like an underground catacomb area. Might very well have been filmed there.

There’s a sense of urgency and energy bundled up in their lead singer. The music is following that. Which is appropriate execution. Thus it’s firing in the correct direction. They say they’re bringing the swagger back to rock. I wasn’t aware it had disappeared. More power to them.

Enjoy the music. May it rile you up to get involved with fighting back against the garbage we’ve been dealing with. It’s a dandy new battle cry and you should join.